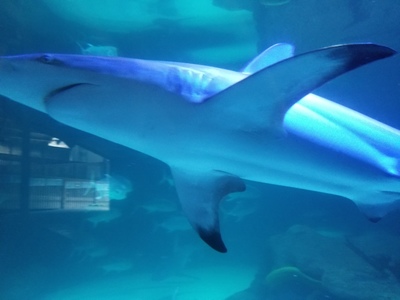 Welcome to our largest exhibit here at Aquarium Encounters.  These big tanks hold 200,000 gallons of saltwater.  It is set up like a big figure 8 and there are two large acrylic windows that separate the coral  and the predator reef. Now, one of the main reasons for those two large windows is to feed our predators.  These large acrylic windows have holes in different spots.  When we are on the coral reef side we can offer food through the glass windows to feed our sharks, eels and even the Goliath grouper. It is also offered as one of our interactive encounters.  We will take guests in on the coral reef side to snorkel or dive and feed the animals in the coral reef and predator reef tanks.

On the predator reef side, you will find a variety of sharks.  Sharks are a cartilagenous species which is known as an elasmobranch. One of several species include our Sandbar sharks. The Sandbars are one of our larger species in here and are known to get upwards to 7+ feet. An easy way to identifiy this shark is by looking at the dorsel fin, the large iconic fin on their back, and their pectoral fins, the two fins on either side.  These fins are very exaggerated being more wide and tall than any other species found in here.

The other larger shark is the Black Tip shark.  This shark will have dark markings on the tips of the majority of its fins and it is a very sleek looking shark. This animal, much like a Spinner shark, has the ability to gain enough speed to leap right out of the water.  We also have a couple of Black Nose sharks in here.  The Black Nose shark will only get to 4 or 5 feet in length.  The identification marking for this shark is the dark black smudge on its snout like it has a mustache.   One last species in here is a Nurse shark.

Some of the other species of fish that you will find in here are mostly Jacks and Snappers.  Jacks have more of a heavily forked liked tail and Snappers will have a more fanned out caudal fin. We also have a Goliath Grouper and two Cobia and two very large Green Moray Eels.  Most of these species are highlighted on cue cards on the very top row of this exhibit.

Now, lets go over to our Coral Reef Tank.