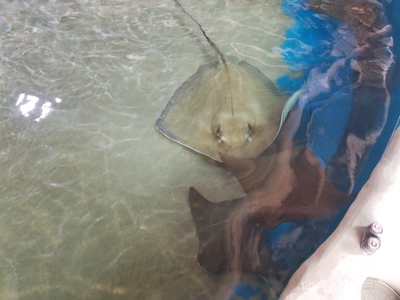 Welcome to Stingray Cove.  This is one of our interactive touch tanks, so if you would like to pet a ray today, the best way to do so is to pet them on their back or wings with a nice flat palm.

There are two different species found in Stingray Cove. The smaller of the two Stingrays, is the Cownose Stingray.  The Cownose Stingray is an open ocean or pelagic species. They are highly migratory and do so in very large numbers.  When rays gather in large numbers, they are known as fevers. Cownose Stingrays have been seen in groups of thousands at a time or as just a few individuals. Their migration can take them from New England down to South America and have even been found off the coast of Africa.  As a pelagic species, you will notice that the Cownose Stingrays have eyes on either side of its head. This will allow them to have a wide radius to search out their predators, but also keeps them close to their fever.

The other species in here is a benthic or bottom dwelling species, the Southern Stingray.  Southern Stingrays are wide and flat, having eyes on top of their heads allowing them to bury underneath the sand and hide from their predators.

All five of our Southern Stingrays are females.  Females will get much larger than males averaging a 6ft wing span and weighing around 200 pounds.  The largest female you can see in this tank is "Big Mama".

You can also get in the water with these animals and hand feed them by participating in the Stingray Cove encounter.  The rays will come up and sit in your lap.  "Pancake" is the star of this encounter.

Now, let's continue over to the Caribbean Spiny Lobster exhibit.