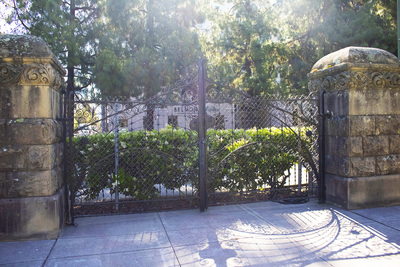 Hello there, name’s Minnie.  I was one of the neighbors to Mrs. Winchester.  I never did get to see the inside of the place; the lady pretty much kept to herself.  She really did love talking to the children.  She used to have ice-cream parties for them in one of the gazebos.  I once heard a rumor that the Jones’ girl got to go inside the mansion and play Mrs. Winchester’s piano in the beautiful Grand Ballroom.  I don’t believe it though.  I can’t recall anyone except her help being allowed inside.  Things have changed a little bit over the years.  Take these gates for example.  Why they used to be located in the middle of the road. But, as the city started to grow, they had to be moved.  At least they did name the street after Mrs. Winchester.

Used to be 161 acres to this estate, but with one thing or another, all that remains today are four acres. Well, anyway, back to the stone pillars.  There used to be two beautiful inscriptions on the pillars.  One of them simply read “S.L. Winchester” and the other one read “Llanada Villa;” that was the name of her estate.  Don’t know exactly why she named it that.  Some town’s people think she built the mansion for the spirits of the Indians shot by the Winchester rifle.  Well, I guess we’ll never know.

It was quite a sight, back in those days, to watch her craftsmen chipping away on the sandstone.  It took months to get the stone shaped; the stone itself was special.  It came from the Phieffer Rock Quarry in Almaden Valley, the same place they got the stone to build Stanford University.

Those rainbow and rising sun designs on the wrought iron gates are supposed to have had a spiritual meaning for Mrs. Winchester, though I don’t know exactly what they meant.

The house is really a thing of beauty, isn’t it?  Notice how the left half is similar to the right half?  That’s called symmetry.  I guess it was popular in those fancy Victorian houses.

Well, as you walk on to see the next two fountains, you’ll want to notice the different varieties of palm trees, the crooked Monkey Puzzle tree, the Crepe Myrtle trees.  The tall hedges are Japanese Cherry Laurel; the smaller hedges are Japanese boxwood.