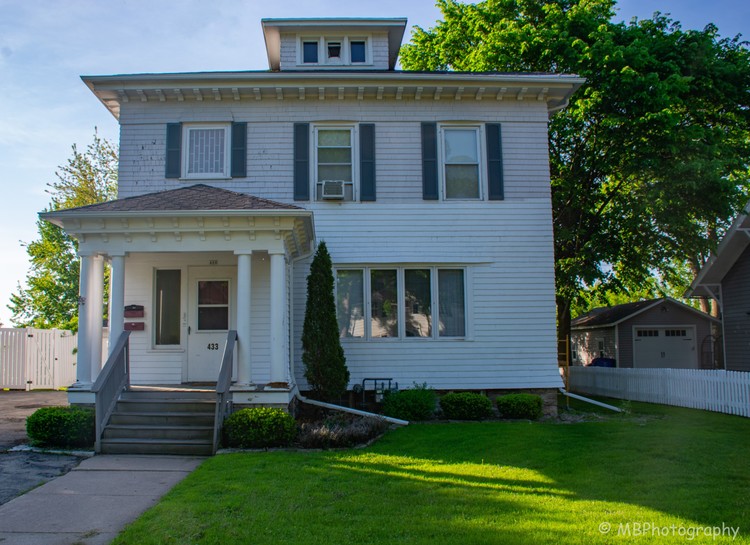 Constructed in 1849 for the Conkey family, this home does not survive intact.  Only the center portion remains.  It was originally flanked by two identical wings that were diminutive versions of the central element.  The west wing, which contained the summer kitchen was demolished in 1914.  The east wing was removed sometime before.

Surviving Greek Revival elements include the low pitched, hipped roof; the small entry porch less than the full height of the front facade (which was typical in about twenty percent of Greek Revival homes); the porch's own hipped roof mimicking a classic pediment; grouped Doric columns (which are a prominent feature of the style); and the wide band of trim beneath the cornice of both the main roof and the porch roof.

Colonel Conkey was a founding father of Outagamie County, the city of Appleton (which he platted), and the Third Ward.  He started west from New York in 1841, making a living as a teacher in the first public schools in Fond du Lac and Madison.  By 1845, he engaged in civil engineering, surveying much of the territory that would become his future home.  In the early years of statehood after 1848, Conkey served terms in the Wisconsin State Senate and General Assembly.  His Civil War duty in the western theater as a colonel of the 3rd Wisconsin Cavalry brought engagements with Quantrill's Raiders.  An accomplished horsewoman, Cynthia accompanied her husband into the field during the war.

The home was built on the bluff overlooking the Fox River and one of the Colonel's business interests, the Conkey Flour Mill.

The Conkey's children included Alice, who Appleton's Alicia Park is named after.  Alice married Alexander Reid, the publisher of the Appleton Post, one of the city's leading newspapers.  Reid also served as United States ambassador to Ireland.  Alice's sister Helen married Lyman E Barnes.  After her father's death, Helen and her family moved into the house when Cynthia built a new home two doors to the east.  Barnes served as Appleton's District Attorney and in 1892 was elected to the United States Congress.