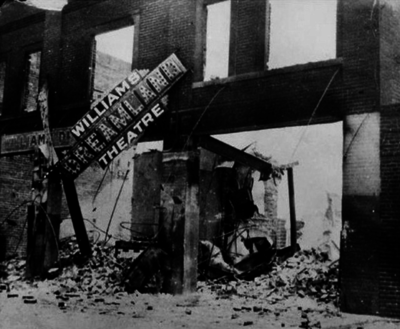 In the end, the violence of the Tulsa Riots lasted 24 hours.  In its wake, 35 city blocks of Greenwood had been looted and burned to the ground including Greenwood's hospital, churches, schools, libraries, their businesses and residences.  It’s estimated that Greenwood lost 1,256 homes, possibly more.  More than 6,000 African-Americans were arrested and detained and more than 800 people were admitted to local hospitals.  Only 36 deaths were officially recorded but the 2001 Tulsa Race Riot Commission estimated the number of deaths between 100 and 300.  One 1921 news article written immediately after the riot stated 175 were dead, both blacks and whites.  Among those deaths was a very prominent and loved doctor, A. C. Jackson.  He was respected by both blacks and whites.  O.W. Gurley, another prominent and wealthy African American, lost everything he owned during the race riot in Greenwood.  Gurley was the founder of Greenwood. According to some biographers, Gurley had resigned an appointment with the administration of President Grover Cleveland in order to seek his future “out west” which included his time in Oklahoma.  Once in Oklahoma he set about creating the community of Greenwood.  He purchased the land and resold it only to African Americans.  He loaned African Americans money to start businesses in Greenwood.   He built his own businesses in Greenwood plus 5 homes in the city.  It has been estimated that Gurley alone lost over $200,000 in the riot.

Gurley had tried to talk to the African American citizens of Greenwood and tell them not to cause a riot but they continued with their plans.  Gurley later testified in court that it was the black citizens of Greenwood who started the riots.  Gurley never recovered from the riot and eventually he moved to California rather than rebuild in Greenwood.

With all this death came orphans.  There were 46 known orphans whose parents died in the riot.  They were housed and educated at a college.  Various estimates of the number of African-Americans left homeless range from 8,000-13,000 people.  Property damage estimates were in the $1.5 million range for real estate and $750,000 for personal property estimates.  The state paid $12,750 just for the National Guard to come and implement Martial Law.

Greenwood tried to rebuild but it was never “Black Wall Street” again.  Rich, white business owners and politicians of Tulsa tried to essentially steal what was left of Greenwood in real estate deals that only benefitted them.  Many African Americans left the area and never returned, including Dick Rowland whose elevator ride with Sarah Page kicked off the riots.