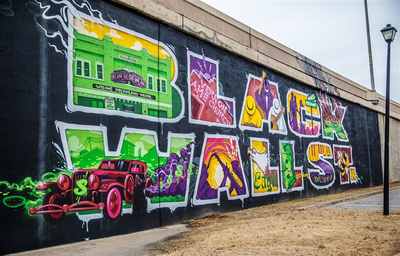 In the late 1800's, places called "freedom towns" or "freedmen's towns" were established.  These were cities where African-Americans could live after slavery ended.  In Oklahoma, there were more than 50 freedom towns according to Hannibal Johnson at ThisLandPress.com.  In 1889, Edward McCabe joined in the Oklahoma Land Run.  His dream was that Indian Territory would become a state governed and populated entirely by African-Americans.  The freedom towns of Redbird and Tullahassee were in nearby Wagoner County.  Summit and Taft were in nearby Muskogee County.  Tulsa area had the city of Greenwood.  Greenwood was a thriving city- one of the most affluent cities in the country.  The city and it's people were doing so well financially that it was called "Black Wall Street".  By 1921, the city of Greenwood had about 10,000 residents.  Greenwood had luxury hotels, luxury shops, restaurants, grocery stores, jewelry and clothing stores, movie theaters, barbershops and salons, libraries and a school system, doctors, lawyers, dentists- everything necessary to be a self-contained city.

In 1921 Oklahoma had a racially, socially, and politically tense atmosphere. People were still alive who held personal memories of the Civil War.  World War One had ended several years prior to 1921 and many ex-servicemen lived in the area- both black and white.  Despite the close of World War I, a fearful atmosphere was still present and this fear was refocused at "outsiders".  Oklahoma had passed segregation laws right after being admitted as a state and voter registration rules effectively deprived African Americans of the right to vote in Oklahoma.  The Ku Klux Klan became official in Oklahoma in 1920 even though Congress had already passed legislation banning the KKK.  Some Oklahomans saw the Klan as an organization that would protect them from the more radical groups that had recently moved in to Oklahoma.  All of these circumstances together led to the Klan coming in to Oklahoma and gaining membership.  It wasn't until 1920 that the Klan made a concerted effort to recruit Oklahomans.  Shortly after the Tulsa Race Massacre, the number of Klansmen in Oklahoma was numbered at 2,000 persons in Tulsa and 2,500 in Oklahoma City.  The women of the Klan didn't organize until 1923, just as the public sentiment and laws were beginning to turn against them.  The Klan in Oklahoma was said to have directed most of their attention to white Protestants who had "gone astray" from their moral code although the Klan did sometimes act against not only African Americans but also against European immigrants, American Indians, Jews, Catholics, and other religious groups.  for more information about the Klan in Oklahoma you can go to okhistory.org where much of this information came from.

On May 30th, 1921, 19 year old African American Dick Rowland, a shoe shiner, was accused of attempted sexual assault of a 17 year old white elevator operator named Sarah Page.  It's worth noting that after the initial incident, she refused to press charges and all charges against Dick Rowland were dismissed.  This was not enough to stop what was coming though.  And what was coming has since been called the worst incident of racial violence in American history.

The following day on May 31st, Dick Rowland was located and taken to the jail.  The sheriff believed that was the only way to keep him safe at that time while the details of the alleged rape were being sorted out.  The sheriff placed Dick Rowland on the top floor of the building and barricaded that floor with his officers trying to keep him safe.  On May 31st, while Dick Rowland was in jail, an angry white mob shoed up at the courthouse to demand that the sheriff hand over Dick Rowland.  The sheriff refused to do this.  Meanwhile, an angry mob of armed African-Americans from Greenwood had also shown up at the courthouse to protect Dick Rowland.  Each mob- both white and black - grew in number as word of a possible lynching spread.  There were clashes between the two groups and during these clashes a shot was fired.  No one knows if the initial shot was accidental or intentional nor is it known who fired the shot.  But once that initial shot went off, many others followed.  Once it was over, 12 people lay dead in the street- 10 white people and 2 black people.  As news of these 12 deaths spread, mob violence exploded.  The African Americans were outnumbered and retreated to Greenwood.  Once they returned to Greenwood, mobs of armed and angry white men descended on Greenwood, looting homes, burning down businesses and shooting people.  The burning and shooting and looting began in the early morning hours of June 1st before dawn.  Later that day, Governor Robertson declared martial law and National Guard troops arrived in Tulsa.  The Guard took custody of all African Americans.  Over 6,000 people were held at the Convention Hall and the old Fairgrounds- some for as long as 8 days.  None were released without a white person stepping up to vouch for them.  Many white citizens of Tulsa did step up to help the African Americans and the Red Cross also offered them assistance.