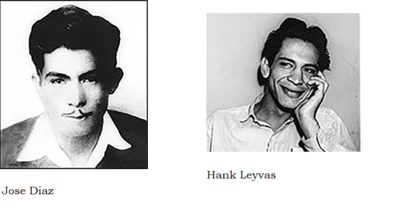 Board #5- The Sleepy Lagoon Murder

Now that you know the backstory, let's focus in on the Sleepy Lagoon murder story.  As I said previously, La Eme Mexicana- the Mexican Mafia- does take credit for the Sleepy Lagoon murder and claims Hank Leyvas was one of their gang members but you will find many people who say the murder was not gang-related.  That's something you'll have to decide for yourself, if you're interested.

The victim in this murder was Jose Gallardo Diaz who was born on December 9, 1919 in Durango, Mexico.  When Jose was 4 years old, his family fled Durango's drought, famine, and the volatile aftermath of the Mexican Revolution.  They joined the millions of Mexican refugees fleeing to the U.S. in search of a better life.  They settled on the Williams Ranch outside the city of Los Angeles, California where they worked as ranch hands.  Most farm workers' children did not finish school.  Jose followed this tradition.  He left school after 8th grade and went to work.  The money he earned was turned over to his parents to help support the family.  Jose's siblings described him as quiet, reserved, and conservative for his age.  He did, however, enjoy the jazz culture and participated in the fad of wearing zoot suits.  By the summer of 1942, Jose had enlisted in the army.  The weekend before he was to leave for duty his mother sent him to have his photo taken.  It was the first (and only) photo ever taken of Jose.  The night before he was to leave for the army, he went to a neighbor's birthday party.

The night of August 1, 1942, began with romance and ended with death.  On this night, Jose attended the birthday party of his neighbor, Eleanor Delgadillo Coronado.  That same night in the early evening hours, several couple's from LA's 38th Street neighborhood arrived at Sleepy Lagoon.  Sleepy Lagoon was the larger of two reservoirs located on the Williams Ranch that were used for irrigating crops.  By day, the Sleepy Lagoon reservoir served as a swimming hole for area Mexican Americans who were often denied access to city pools due to segregation.  By night, it served as a lover's lane for area youth.  On the night of August 1st, Henry Leyvas and his girlfriend, Dora Barrios, were among the couples spending time together at Sleepy Lagoon.  As they sat in the car under a full moon possibly around midnight, they were suddenly attacked by a group of boys from a rival neighborhood called Downey.  The couple was badly beaten.  Later that night, Hank returned to 38th Street, gathered about 30 of his friends, and they headed back to Sleepy Lagoon to get revenge.  At least one member of the 38th Street gang grabbed his 22 rifle and some shells to take with him to Sleepy Lagoon though there was no evidence it was used to murder Jose Diaz.  The spot where Hank and Dora had been beaten was deserted so the group decided to go to Eleanor Delgadillo's birthday party nearby.  They were convinced that the people who had beaten Hank and Dora were at that party.  In the murder trial testimony it was revealed that 8-10 of the 30 people in Hank's revenge group were also members of the Downey group.  This same 8-10 boys had come to the birthday party earlier in the evening uninvited and tried to cause trouble because the host of the party refused to give them beer but that group left the party before Hank's 38th Street gang arrived.

Meanwhile, near 1:00 a.m. the band at the Delgadillo birthday packed up and left.  A radio was put in the back yard and members of the family along with a few remaining guests continued dancing until about 1:45 a.m..  The birthday girl, Eleanor Delgadillo Coronado, later said she saw Jose leave the party with Luis "Cito" Vargas and Andrew Torres.  Ten to twenty minutes after Jose left the party, the 38th Street gang arrived at the party seeking revenge for the beating of their friends earlier that night.   There was a brutal fight that lasted about 10 minutes.  Many were wounded in the fight.  Later that night/morning, Jose Diaz was found lying face up in the middle of the dirt road outside the fence south of the Delgadillo home.  He was unconscious.  He had been beaten and stabbed.  He was barely breathing, bleeding badly, and his pockets were turned inside out.  Lino, Jose's younger brother, picked up Jose and rushed him to LA County General Hospital.  Jose died soon after arriving at the hospital.  No evidence was ever found that showed what Jose was doing or where he was during the free-for-all fight at the Delgadillo party.

Jose's death certificate and autopsy give the cause of death as a contusion (bruising) of the brain and a subdural hemorrhage due to a basal fracture of the skull.  He had cuts, bruises, and swelling on his head and hands.  He had been stabbed twice and a finger on his left hand was broken.  Jose never regained consciousness after being found.  Jose was said to be drunk at the time of his death, but the doctor who testified would not testify that Jose was drunk.  One medical examiner stated that he thought Jose's injuries were consistent with being hit by a car.  As a result of these injuries and primarily because of the profuse hemorrhage and skull fracture, Jose Diaz died about 4:00 a.m. on August 2nd.

Rather than investigate, the police arrested Henry Leyvas (who already had an arrest record for violent crimes) and 21 other members of the Mexican American community for the murder of Jose Diaz.  During interrogation, many of the men arrested (some of whom were under the age of 18) were beaten and threatened to get confessions out of them.  Their girlfriends were also interrogated and received the same treatment.