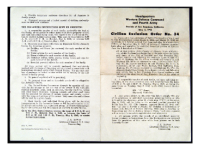 In 1945 the internment camps began closing.  This was, in part, due to a Supreme Court decision in the Endo v. The United States case.  Mitsuye Endo was a young Japanese-American woman who was sent to an internment camp.  You can read more about her on board #3.

By March of 1946, the last of the internment camps had closed and the government was selling off all the property, ending leases to the leased properties, etc.

I'd love for you to learn more.  Feel free to come by the circulation desk and try to complete The Suitcase Challenge.  You can also make an origami Peace Crane to decorate the library for Christmas or you can try your hand at writing a Haiku poem.

Once you've completed one of these challenges, you're ready to move on to one of the other sections of the exhibit- either the Zoot Suit Riots or the Tulsa Race Massacre.  I hope you've learned something new about the Internment Camps and enjoyed it.  Don't forget, artist Nancy Chikaraishi is coming on December 13th to show her art and talk about her parents' experience in the internment camps.