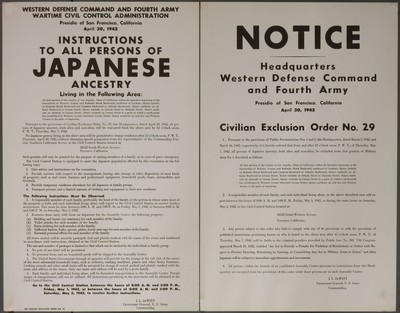 On December 7th, 1941 Japan bombed Pearl Harbor.  The predominant feelings among Americans were anger, confusion, and shock.  On December 8th, the US declares war on Japan.  By the afternoon of December 8th, the FBI had taken about 100 Italians, over 600 Germans, and over 1200 Japanese into custody on suspicion of espionage.  Any pressure that President Franklin D. Roosevelt had previously felt to sequester and confine the Japanese people was dramatically increased after the bombing of Pearl Harbor.  A mistrust of Japanese, German, and Italian people had been growing in the US and had reached intense levels.

President Franklin D. Roosevelt had many people in high-ranking military positions urging him to isolate and contain the Japanese in the US- whether they were already citizens or not.  On December 9th, President Roosevelt gave a radio address to the American people and finally, in February of 1942, President Franklin D. Roosevelt issued Executive Order 9066.  People of Japanese ancestry were ordered to evacuate certain areas of the country and live in internment camps for an indeterminate period of time. One person from each Japanese family was required to report to a Civil Control Station to receive further instructions on May 4th or May 5th of 1942.  When they evacuated their homes, they could only bring one suitcase with personal possessions and within that suitcase they were also required by the government to bring bedding and linens (meaning blankets, sheets, towels and washcloths) for each family member, toiletry items (toothbrushes, combs, etc.), clothing for an indefinite time period, sufficient dishes and silverware (including knives, forks, spoons, plates, bowls, and cups), and essential personal effects for each family member.  The suitcase could be no larger than what could be carried by that individual.  No pets were allowed.  The family was given an identification number and transported to a facility.  Facilities included places like repurposed horse stalls at old racetracks, buildings that were previously fairground buildings for animals,  and old prison buildings.

Early on, many Japanese thought that if they cooperated, the government and Americans would see that they were patriots and not spies and things would calm down and they could go on with their lives.  When they were asked to register with the government, they did so.  And then when they were ordered to relinquish their radios to the government, the majority of them did that too.  When they were given curfews, they complied.  And when they were ordered to pack up and move out of their homes into "camps", the majority did that as well.  Unfortunately, it did not gain them anything.  When the Japanese Americans were finally released and allowed to go home, many found their homes burglarized and/or vandalized.  Some came home to find squatters living in their homes.  Some had no home or land to go back to because their property had been sold at rock-bottom prices.