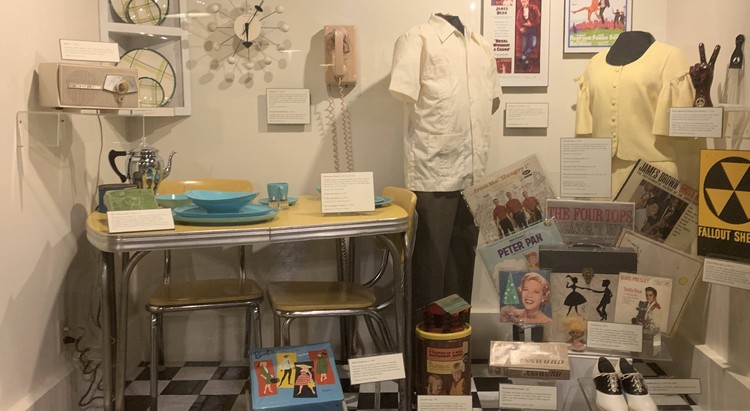 [Train Whistle] The two cases by the door showcase the many physical objects found in Augusta during these eras. In the 1950s and 60s case, note the woman’s outfit, kitchen set, and telephone. With a backdrop of vinyl albums, the 1970s and 80s case include leisure suits, NASA, and Augusta college basketball memorabilia, toys and early cellphones, video games, and cameras. These cases evoke a feeling of each era. Augusta was experiencing many of the changes felt across the country during the 1950s and 60s. With the creation of suburbs and expanded road system, the inner city fell into disrepair, sparking a revitalization effort. Culturally new music and literature swept the River Region. Soul singer James Brown and opera diva Jessye Norman made Augusta famous around the world. The 1980s heralded in more changes to the downtown area. The first segment of the Riverwalk opened in the late 1980s, drawing crowds back to the city center. [Train Whistle]