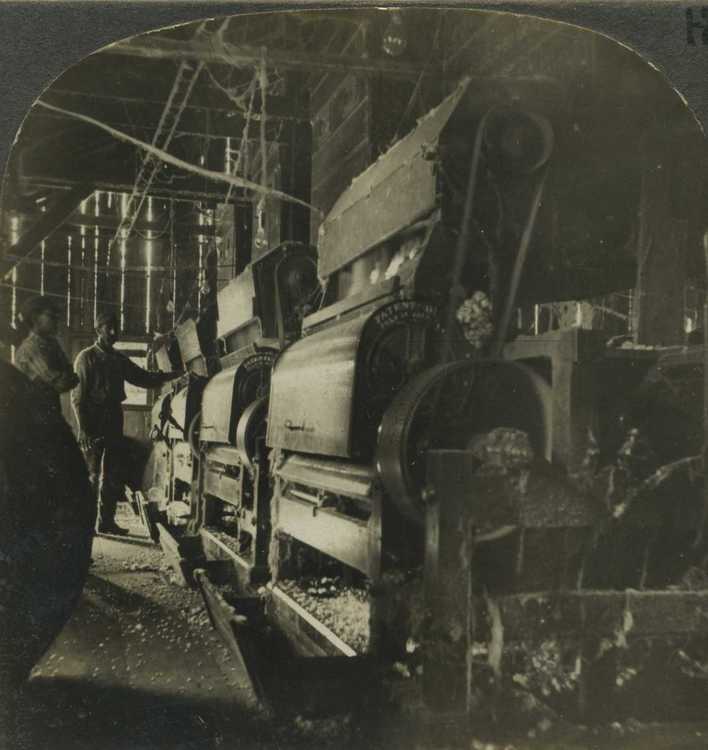 [Train Whistle] By 1835 Augusta and Hamburg were shipping over 160,000 bales of cotton down the Savannah River. Augusta’s location at the headwaters of navigation on the river made the city an inland commercial hub, serving both Georgia and South Carolina. However, the growing popularity of railroads diminished the need for towns to be located along rivers.  The Charleston and Hamburg Railroad, on which The Best Friend of Charleston began operating in 1833, threatened Augusta’s dominance as a trading center. Trade was being redirected to the South Carolina side of the Savannah River. To hinder commercial decline, the state legislature chartered the Georgia Railroad Company in December 1833. The company was tasked with constructing a railroad west of Augusta, stretching the trading sphere into the state’s interior. Two years later, the charter was amended to give the company banking powers, prompting a name change to The Georgia Railroad and Banking Company. The original rail line opened in 1837. By 1842, the rail route reached west of Marthasville, present day Atlanta. The Georgia railroad proved vital to both the economics of Augusta and Atlanta. A combination of the cotton market potential, a fear of losing more people to westward movement, and the noted potential of waterpower, led to the building of the Augusta Canal in 1845 to 1847.  Prior to this time, Augusta had enjoyed prosperity as a gateway to the frontier, and as a trading center. This changed however as more towns appeared along the Savannah River and rail run lines were built. Modeling itself after Lowell, Massachusetts, and even referring to itself as the “Lowell of the South,” Augusta’s industrial development movement was led by Henry H. Cumming. Cumming’s centerpiece for this industrial development was a canal, which would provide moving water to power factory turbines. Cumming was the son of Augusta’s first intendent mayor, and a prominent local attorney. He applied his vision and influence to many civic projects, particularly the Augusta Canal. He served as the president of the canal commission, and demonstrated his faith in the project by personally underwriting the initial survey of the proposed canal in 1844. The Augusta Canal Commission was established in 1845 to oversee construction of the canal. Work began that year with $4,000 from local banks, and $100,000 of city bonds. The Augusta Canal was designed in three levels to generate maximum power. Over 200 workers labored to complete the first level by November 1846. The second and third levels were completed by 1850. Initially the canal was 5 feet deep, 40 feet wide, and over 8 miles long. The canal provided easier transportation of cotton and waterpower for cotton textile mills. The waterpower from the canal made Augusta one of the few southern manufacturing centers. The cotton textile mills were soon followed by lumber mills, iron works, and a wide variety of light industries. [Train Whistle]