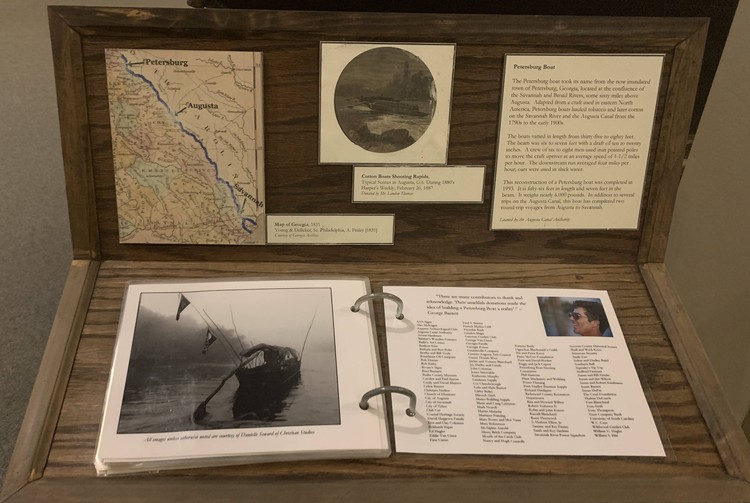 [Train Whistle] The Petersburg boat was named for the now inundated town of Petersburg, Georgia, located at the confluence of the Savannah and Broad Rivers, 60 miles above Augusta. Adapted from a craft used in eastern North America, Petersburg boats hauled tobacco and cotton on the Savannah River and the Augusta Canal from the 1790s through the early 1900s. The boats ranged from 35 to 80 feet in length with a beam of 6 to 7 feet, and a draft of 10 to 20 inches. Using iron pointed poles, a crew of 6 to 8 men moved the craft upriver at an average speed of 1.5 miles per hour. The downstream run averaged 4 miles per hour. Oars were used in slack water. This reconstruction of a Petersburg boat was completed in 1993. It is 56 feet in length and has a 7-foot beam; it weighs nearly 6,000 pounds. In addition to several trips on the Augusta canal, this boat has completed two round trip voyages from Augusta to Savannah.    [Train Whistle]