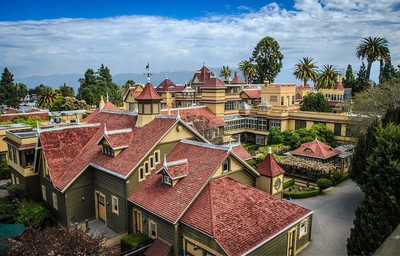 Hey, come on in.  I’m Fred Larson, Mrs. Winchester’s mechanic and I spent a lot of time right here in the garage.  I took care of Mrs. Winchester’s cars and back in her time, cars sure needed a lot of work.  As a matter of fact, that’s exactly how I got my job here.  You see, I used to fix cars up in San Francisco, and I was plenty good at it if I do say so myself.  Well, Mrs. Winchester had this French Renault that kept breaking down, so she went all the way to San Francisco for a good mechanic.  And, you know, I was curious to see Mrs. Winchester and her bizarre house so I came down.  Well, after I fixed the car, Mrs. Winchester asked me stay forever and offered a salary, well, I just couldn’t refuse, as they say.  So I stayed with her right up to her death in 1922.

Mrs. Winchester had several cars.  That French Renault was a 1909 model.  It cost her $8,400 but it was top-of-line model with a self-starting engine.

This garage that you’re standing in has a wooden floor and in the back corner is a sunken pit to make it easier to work on the cars.

The cars were all auctioned when she died, so we don’t have them anymore, but there’s an old photo of the Renault on the wall over there.  That’s me at the wheel.

Sarah Winchester liked to go out driving on Sunday afternoons.  We would usually go to San Jose, just about four miles from here.  She didn’t get out of her carriage at the stores, so the merchants brought goods out to the sidewalk for her inspection.  One meat market even installed a special door so that her carriage could go directly into the store!  She did so much business with them and paid so generously that they were happy to do this for her.

Well now, you’ll be walking through the car wash.  Mrs. Winchester’s car wash was designed so that the hose could be attached to the end of the pipe and it would be swung in a 360-degree circle so that all parts of the car could be washed without having to drag the hose all around.  You’ll enter the car wash through the small door, but the cars were driven in through the large double doors right next to them.  The car wash sure made it easier for us to wash her cars.  So long, for now, come back and visit sometime, you hear?