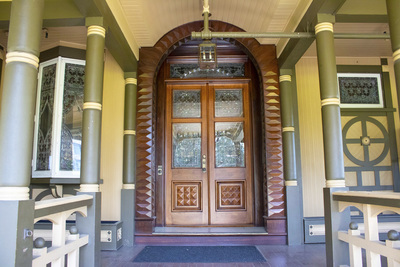 “Sarah Winchester was born in New Haven, Connecticut in 1839.  At the age of 23 she married William Winchester, joining the family that would later produce the iconic Winchester Repeating Rifle.  The Winchester rifle was innovative for its time since it could consecutively shoot 15 bullets before reloading.

It was so popular that it was nicknamed “The Gun that Won the West” making the Winchester Family -- including Sarah and her husband -- very rich indeed.

Despite this wealth, Sarah was not very lucky.  She had one child, a daughter Annie, who died weeks after birth of a rare childhood disease.  Fifteen years later, Sarah’s husband William died of tuberculosis at the age of 43, leaving Sarah a widow.

The legend goes that a distraught Sarah sought guidance from a medium who told her that she was plagued by spirits of those killed by Winchester rifles. The medium told Sarah that to protect herself, she should move out West and build a house. Continually building, but never finishing.  The house’s many rooms would shelter protective spirits, and the sounds of hammers, saws, and drills would drive unfriendly spirits away.

It’s said that Sarah purposely designed this house with its stairs to the ceiling and doors to nowhere so as to confuse the spirits that meant to do her harm.