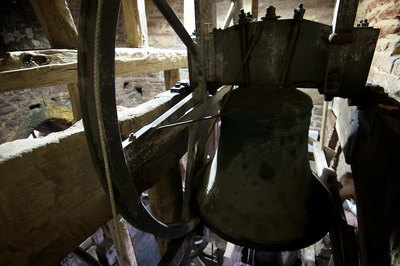 The belfry has six bells at two levels. The famous Bilbie foundry at Chew Stoke made two of our bells, one in 1699 and the other in 1713. This foundry was formed in 1690 and have been producing bells since.

Our oldest bell dates from 1610 and the most recent from 1885. They are hanging on the original oak beams. The casting of the bells was often done close to the church to save on the difficulty with transporting them.

The Sanctus Bell stands in a stone cote outside the church above the Chancel Arch. It has recently been repaired and can be rung again from a rope within the chancel. In many communities this was the only bell that was required by law. It was often used as a community clock to inform villagers of the time.