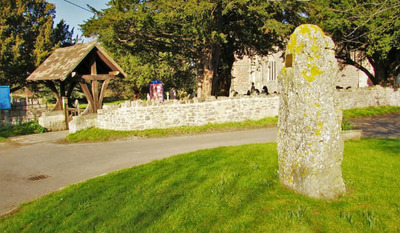 Star the tour outside the church in the churchyard

The 12th century church of St Marys, was built on an ancient holy site and alongside a Romano British 4th century cemetery. This was discovered in 1972 when the new school was built. Between the church and the school is our very own standing stone. It was quarried locally  and was discovered buried in a nearby field and rediscovered and erected here in 1987 by the Portbury Historical group.

The graveyard contains many ancient graves and the older ones from the early 17th century are kept in the church. The oldest is that of William Godwin, yeoman of Portbury who lived at the present day Oakham Farm. He died in 1584 aged 95. This was the former altar stone and still has the consecration crosses visible. At present, the stone is under a carpet so you may have to find a church member to help you locate it.There are many other headstones as old as 1612 that you can see within the church and interesting memorials on the walls.

The many yew trees are over 800 to 1000 years old and have been recorded in the national study. We are lucky to still have a veteran yew that was considered to be ancient as far back as 1791 when Reverend Collinson recorded the yews at Portbury.

Now you can walk down the path and enter the church via the main door.If you look carefully you may see a carved cross on the right hand wall as you enter. This is the consecration cross where the bishop would have anointed the church. These represented the sanctity of the church.