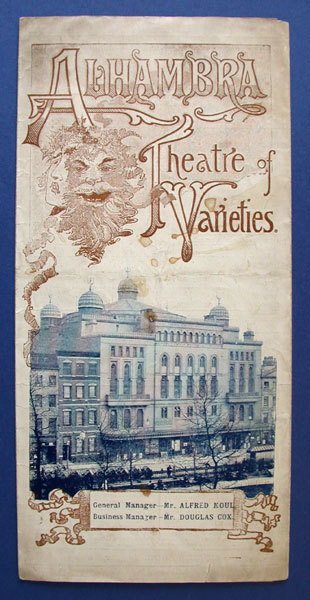 Now in the 'beginnings of film' case, we refer not just to the Lumière invention- the Cinématographe- but, very quickly, some Brits started their own moving picture cameras and projectors, Robert Paul being the most important. His first display of moving pictures was at Olympia and he called it the Theatograph. And you'll notice at the bottom of the programme in the case that it says 'similar to the Cinématographe showing at the Empire Leicester Square'. Very quickly, he got an engagement to show his moving pictures at the Alhambra Theatre, also in Leicester Square on the site of today's Odeon Leicester Square. And he changed the name to Animatograph and you'll see a very big programme- almost panoramic- for the Alhambra. There's a very interesting silk programme on a blue cushion at the bottom of the case showing that Queen Victoria, no less, had an exhibition of moving pictures at Windsor Castle in 1897, perhaps the first royal command film show.