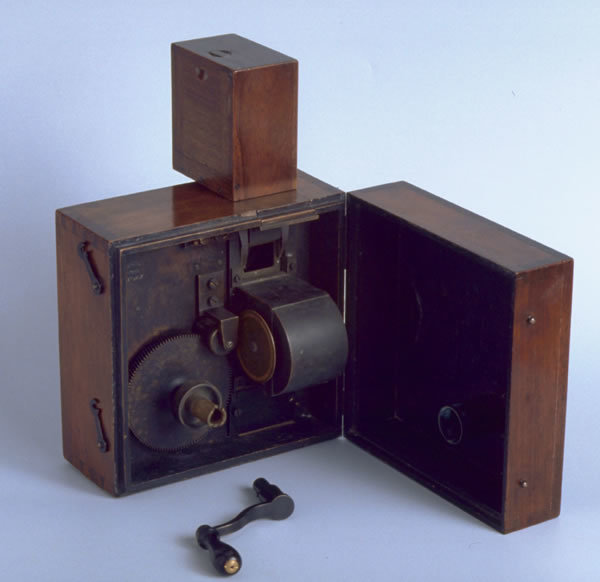 But perhaps more important are the Lumière brothers who came along very quickly afterwards and invented the Cinématographe. And we have a very important example of the Cinématographe in the case number 108 of the first edition of 200, if you like, that were made in 1896. The Lumières had first showed moving pictures in December 1895 and they were shown in this country in February the following year. So 1896 is the year that we're concerned with. The Cinématographe is a beautiful little machine which in fact was the camera and projector all in one tiny box. The Cinématographe is perhaps the linchpin of our entire collection because everything 'precinema' leads up to this, and everything 'cinema' in the upstairs gallery comes after the invention of the Cinématographe. And, indeed, the word 'cinema' that we use comes from the Lumière brothers. The Lumière brothers' father was a photographer which obviously led to their interest in this whole world and there's a fascinating photograph of the two of them as boys playing a game of chess taken by their father. Later, it was Louis Lumière who kept up the interest in cinema and his brother, Auguste, became a doctor. We have in the collection, and I think one or two of them are in the display case, autographed letters of both brothers.