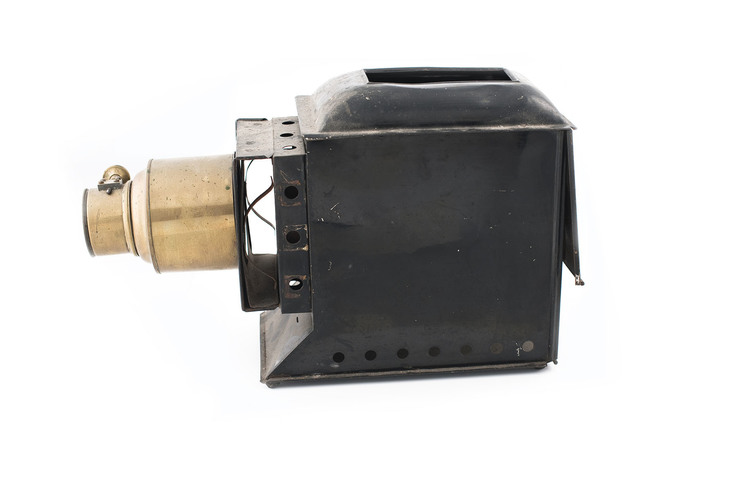 Now there's a very long case dedicated to the Magic Lantern. If you start at the extreme left, there's a very early book- the English translation of a book- by Porta (Magia Naturalis) which describes the camera obscura for the first time; a black box in which artists could see a picture- Vermeer perhaps most famously. And below that, an even earlier book because it's the Latin original, is by Athanasius Kircher and that shows illustrations of the magic lantern- the first known illustrations, although the artist clearly didn't have a clue how it operated because they are in fact not correctly portrayed at all. A Magic Lantern is sort of lost in the mists of time but there's a great number in the case and a great number of slides. The ones that particularly interested Bill and I were the Magic Lantern slides that moved- that caused an image to move on the screen. This was the first form of projection, shall we say. There were rotary slides, there were lever slides and slipping slides. A lot of them were humorous so that you saw a man and the lanternist would slide out the extra piece of glass and his nose would grow to some extortionate length. Later, cheaper lithographic slides were produced and you'll see a set of 'Alice in Wonderland' and even later still in fact right up to the 1930s, there's a 'Mickey Mouse' lantern box with original Disney slides. So the Magic Lantern really overlaps with cinema and, indeed, I can remember going to the cinema in my youth when, in the interval, they used Magic Lantern slides to show you what was coming next week.