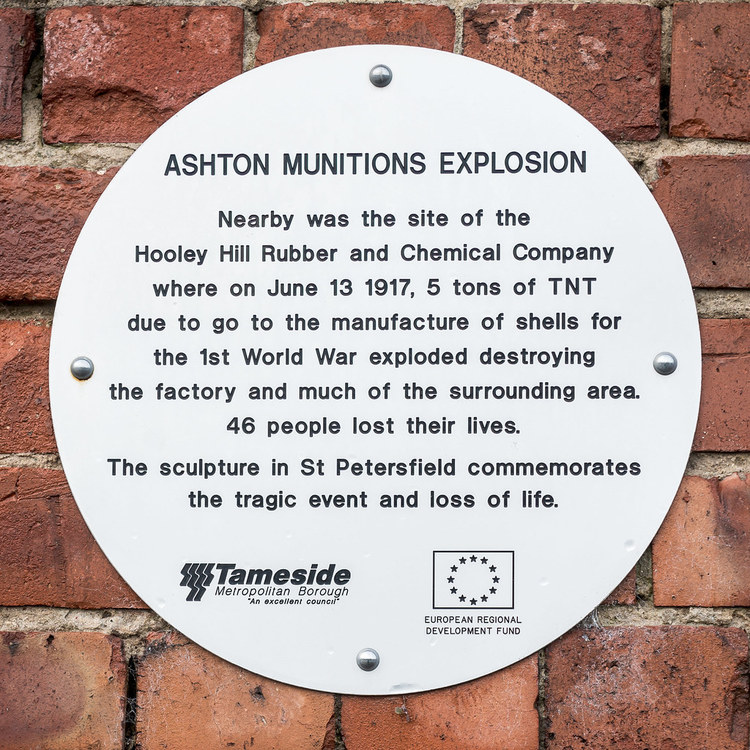 On the right, just set back, is the site of a major disaster towards the end of World War I.   In 1914 The Hooley Hill Rubber and Chemical Company in Audenshaw was approached to build a plant capable of producing around five tons of TNT per week for the war effort.   A former cotton mill next to the canal in William Street, on the right, was acquired.   By 1917, the capacity of the plant was around 25 tons of TNT per week.

On Wednesday 13th June 1917, a fire broke out at the factory.   The fire quickly took hold, spreading to the roof, and flames spread to an area where five tons of TNT, packed into kegs, was stored.   As a result, an explosion tore the works apart.   It destroyed the factory and threw heavy objects long distances.   Most of the workers were killed instantly.   The factory was obliterated and two large craters scarred the site.   Two gasometers in a nearby street were ripped open by the blast, sending a massive fireball hundreds of feet into the air.   Hundreds of buildings in the surrounding area were damaged, leaving many of the nearby houses uninhabitable.   In total, 43 people were killed and more than 120 hospitalised.   This was a catastrophic day for the people of Ashton-under-Lyne, and a memorial to the event can be seen in the nearby park.