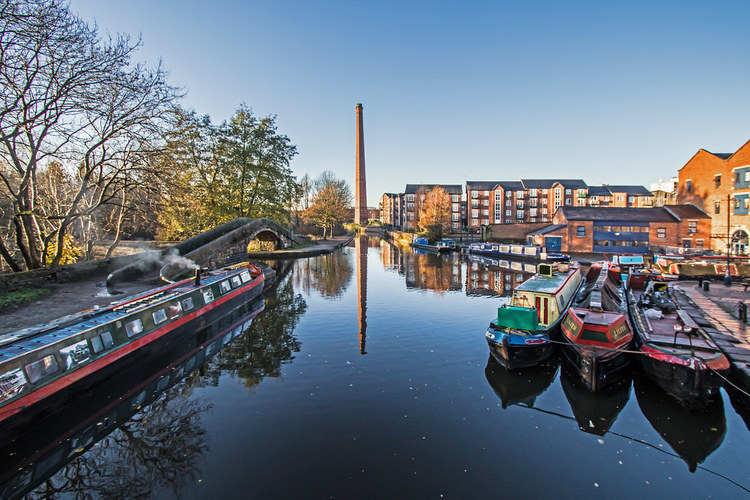 Today we will be sailing on the Ashton Canal from here at Portland Basin, to Droylsden.   The canal actually runs for nearly seven miles to Manchester, but today we will turn around at Droylsden.

Following the success of The Duke of Bridgewater’s canal in moving coal from his mines to Manchester, and other industrial areas; a group of mine owners around Ashton and Oldham saw the potential for doing the same thing themselves.

In 1792, a proposal for an Act of Parliament was put forward, to establish what was originally to be called the Manchester, Ashton-under-Lyne and Oldham Canal.   This was approved, and the original scheme was completed in 1796.

The original purpose of the canal was to transport coal to Manchester.   In the first half of the nineteenth century the Ashton Canal prospered.   It carried coal to the mills and coal merchants along the line. It also brought in raw materials to the mills, and took out the manufactured products.   It transported stone for building and road construction, and it even carried passengers.   With the opening of the Peak Forest Canal link to Portland Basin, it meant that the sought after material of limestone could be transported to various industries in and around Manchester.

However, the coming of the Railway Age saw a loss of trade for the canals.   Even so, the Ashton Canal took advantage of new opportunities, and when the railway opened at Guide Bridge (on our route today), every train was met by a swift horse-drawn flyboat to whisk passengers the rest of the way to Ashton.   However, as the railway extended, even this boat service became redundant.

The quantity of goods carried by the Ashton Canal fell from 50,000 tons in 1933, to just seven tons in 1955.   In the early 1960s it looked like the Ashton Canal was going to follow the path of other local canals, and closure looked certain.   It fell into neglect and suffered vandalism.   However, in 1964, the Peak Forest Canal Society was formed, and with the Inland Waterways Association, fought to keep the Ashton Canal open and restore it.   Eventually, in 1971, the canal was given a reprieve, and restoration was approved.   It re-opened for navigation in April 1974.   Since then, the use of the canal network for leisure has developed, and the Ashton Canal is an important link in the popular Cheshire Ring.

During our journey, we will point out some of the key landmarks for current and previous industrial developments.

Next
Community Spirit 2 - Portland Basin to Droylden and return
HOME