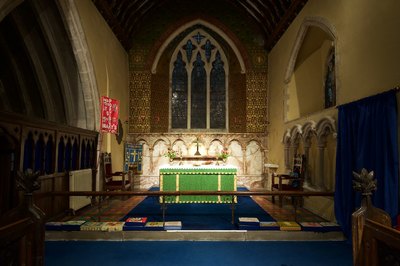 The Chancel is the most holy part of the church. Note the high pointed Chancel Arch giving the separation between the Nave and Chancel. Originally there would have been a Rood Screen at this point with steps to the left of the Chancel Arch, and a gallery above the Rood Screen. Minstrels could play and sing from here. This was made illegal by Queen Elizabeth I and churches were ordered to remove the screen. Fortunately, Portburys was not removed until the Victorian renovations took place from 1874. Parts of the Rood Screen were re-used to create the gateway to the tower that you have already seen..

The stained glass windows are Victorian with the largest behind the altar commemorating Alfred Brittan, a resident of Failand Hill House who paid for the building of the Village Hall in 1894.