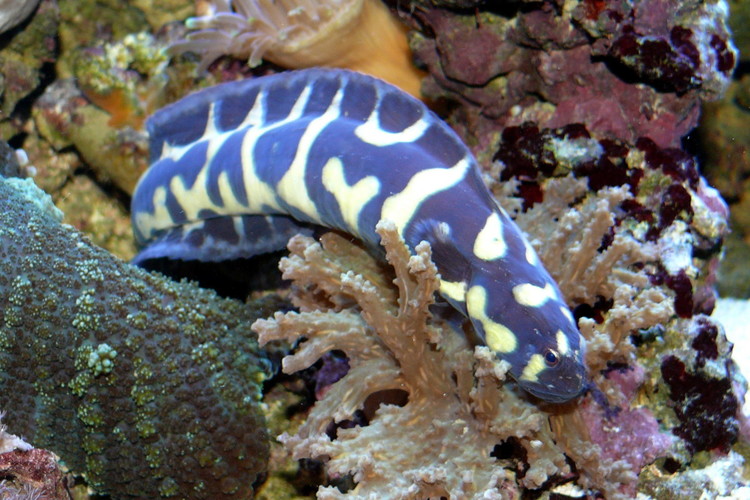 Like pufferfish, the striped burrfish can take in water to inflate its body when it feels threatened. It does this with the help of an organ called the buccal pump. The spikes of the burrfish are an additional defense mechanism that the pufferfish does not have. Another interesting thing about burrfish is that rather than relying solely on their fins, Striped Burrfish use their gills like jets and push water through them to propel themselves forward.

Try to spot the baby epaulette sharks in this display. Since they are still quite young, they love to hide in crevices and usually just come out to eat. Unlike most sharks, the epaulette has the ability to uses its fins as legs to "walk" over reefs to look for prey. In addition, the epaulette shark can breath out of water! It can actually survive 60 times longer without oxygen than humans! In order to do this, the little shark slows its breathing and heart rate and powers down its brain.

This species gets its name from the very large, black spot behind each pectoral fin, which are reminiscent of military epaulettes. These markings can be confusing for predators as they look like a large eye.

These young epaulette sharks hatched here at the aquarium in Fall 2019 from egg casings called mermaid purses. As with most sharks, they have very low reproductive rates and are vulnerable to population decline from habitat loss and climate change.

This type of fish likes to build burrows by digging in the sand bed, even when they have established their home. They spend their days usually searching for food or hiding under the rocks when they are not digging.

In some occasion, the burrows can be shared for any symbiotic relationship with another species like shrimp.