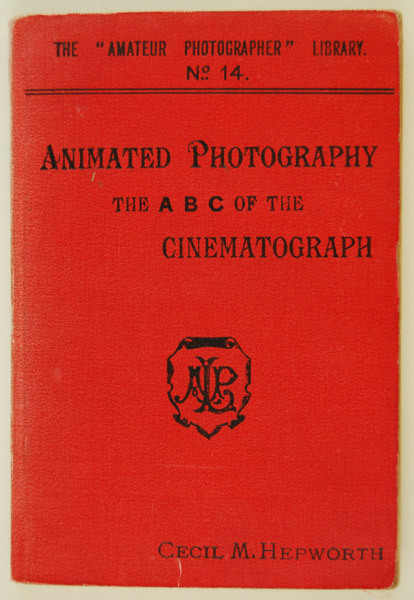 And on the left of the cushion, there's a little red-coloured book called 'Animated Photography' which is probably the first book in our collection of over 15,000 on the history of cinema. This is the earliest book by a man called Cecil Hepworth whose father had been a magic lanternist. There are earlier books but this is the first after the invention of cinema. Probably not as important as Hopwood's 'Living Pictures' which came fairly quickly afterwards which has a lot more technical detail than Hepworth's book. And on the right-hand side, you'll see an early movie camera. This is actually during the period of the teens. We know this- it's a Moy & Bastie with a crank handle and it was actually used by a photographer during the Great War of 1914 to 18. And, in the photograph at the rear of the case, you will see him in uniform standing beside his camera on a tripod. And if you look very closely, you will recognise that it is the identical camera, although sadly we don't know of the tripod.