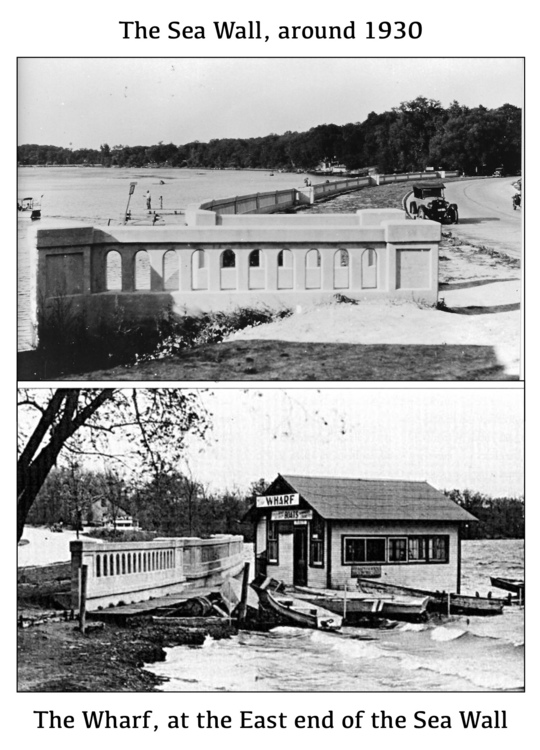 Now you are approaching the promenade  by Lake Zurich. 100 years ago, there was just a gravel road going past the lake edge. It would be crowded with cars and people in the summers. In 1927, an impressive looking concrete barier called the Sea Wall was built, with access stairs going  down to the water. In the 1930s, a wooden board walk was built against it along the water’s edge.

At the near end where you are now, there was a small beach area and pier with a refreshment stand called The Wharf, built by August Froelich in the 1930s. The Wharf  was a popular place, and was used every summer until around 1958. In its later years it was called the Sea Wall Inn. Continue walking down to the center promenade area and pause, maybe sit on a bench and look out over the lake.

At the other end of the Sea Wall is Bill’s Boats Bait and Marina. This location has been owned by the same family since the late 1800s, and they have been renting boats here for more than a hundred years. The name Bill’s Boats goes back to the early 1960s, when Bill Pearce took over the business. I still remember my grandmother taking me and my sisters there in the early 60s to rent a boat so we could try our luck at fishing. Ahh, the good old days!  Push NEXT while you are still on the promenade.