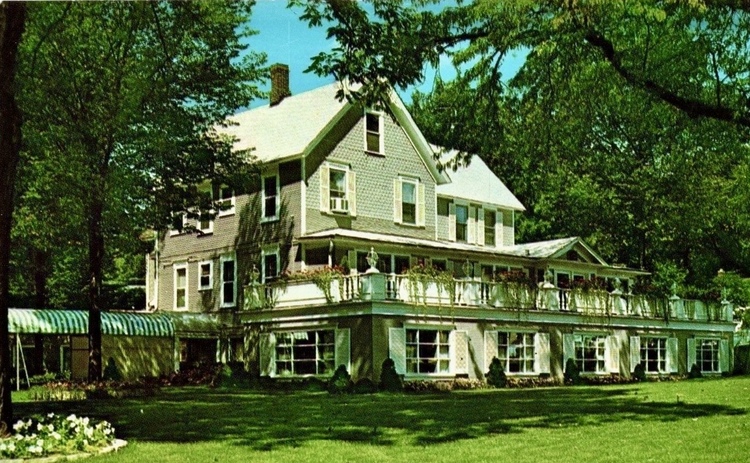 From the corner, turn right and head down toward the lake. Just before the parking area entrance, on your right, was where Seth Paine’s home was, which later became Young’s Hotel. Across the street from it in this area was a huge building, built by Seth Paine in 1853 and called the “Stable of Humanity”. It measured  50 x 150 feet and had three stories and a basement. It contained a gathering hall, a dance floor, apartments to rent, and a post office. There was also a school room, which for a few years Paine donated the use of as Lake Zurich’s only school. Seth Paine was an ardent abolitionist , and the Stable of  Humanity was reportedly a stop on the Underground Railroad.

A few steps further used to be Farman’s Hotel, an old and very popular restaurant here in Lake Zurich. This place started out as a farm house built in the late 1880s by a German immigrant named Herman Helfer. By the late 1890s, the ice harvesting businesses on the lake had created a growing need for rooms to rent to the seasonal ice workers. Helfer started offering rooms, and his home became the Lakeside Hotel. After Helfer passed away, the place was purchased by Guy Farman in 1929, and for the next 54 years it was the Farman Hotel. It was a popular place to eat for locals and their guests, and also a favorite hangout for jockeys and horse trainers from Arlington Park. Farman's finally closed in 1983, and other restaurants took over. Among them were the Yorkshire Inn,  Ocean Ranch and the American Smokehouse Barbeque. In 2004 the building was raised to make way for new townhouses. Walk on and cross Lakeview Place, then stop and push NEXT.