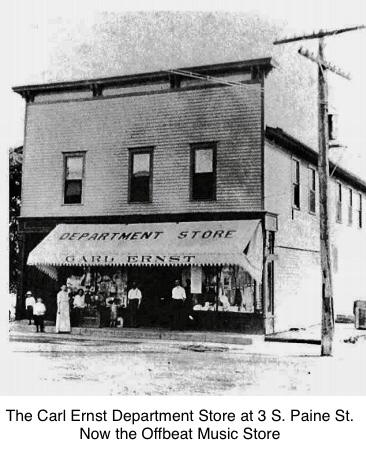 You are now at the town’s main  intersection, what used to be Paine and Main Streets. It has changed quite a bit since the old horse and buggy days. The only old original building on that corner is the present Offbeat Music store. It was originally built in 1890 by Emil Ficke as a general store and post office. Later it was Carl Ernst’s Department Store, as shown here. A stone throw farther east along Old Rand there actually used to be a cemetery on the left in what used to be called Oak Grove. This was just beyond the parking lot by DiPiero’s. You can push NEXT