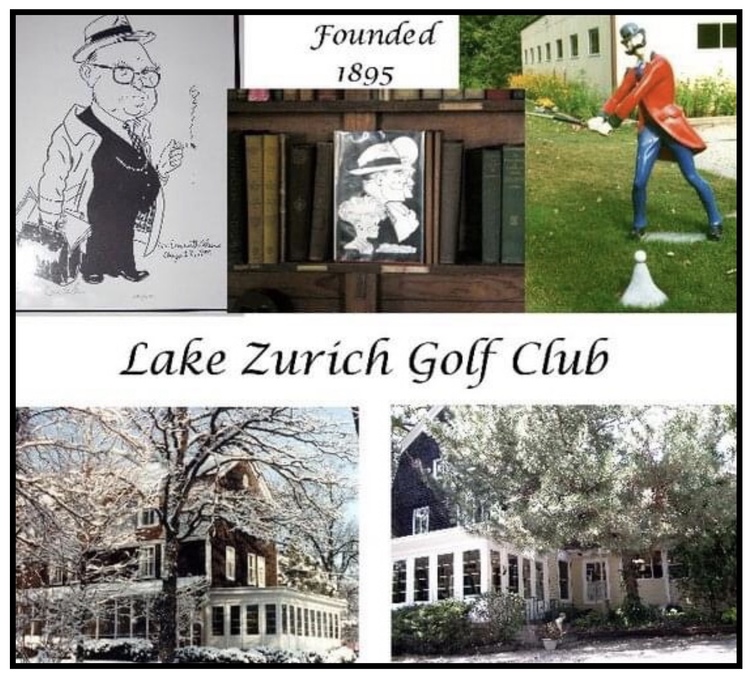 Two blocks farther on, you will come to the Lake Zurich Golf Club at 564 N Old Rand Road.
The club was founded in 1895 by a group of lawyers and professors from Chicago as a golf course and retreat. At first the club was for men only, and women would not be allowed inside until 1946.  In 1912, when the Palatine Lake Zurich and Wauconda Railroad was being built, the railroad tried to condemn and acquire part of the property. Putting on their thinking caps, the club decided to prevent that by establishing a cemetery on the property. Four medical cadavers were brought in from Chicago and made permanent  members so to speak. They were buried on the part of the course that the railroad wanted, and marked with headstones. The railroad then had to buy property to the east of this and go around. Among the golf club’s well known members was Leo Burnett, who ran a world renowned advertising company in Chicago. One day in 1956, he invited the famous baseball player Joe DiMaggio and his wife Marilyn Monroe out to the club. Marilyn sat on the bench at the eighth hole, while Joe and Leo played. Reportedly for years after that, the bench was painted pink in honor of Marilyn. NEXT