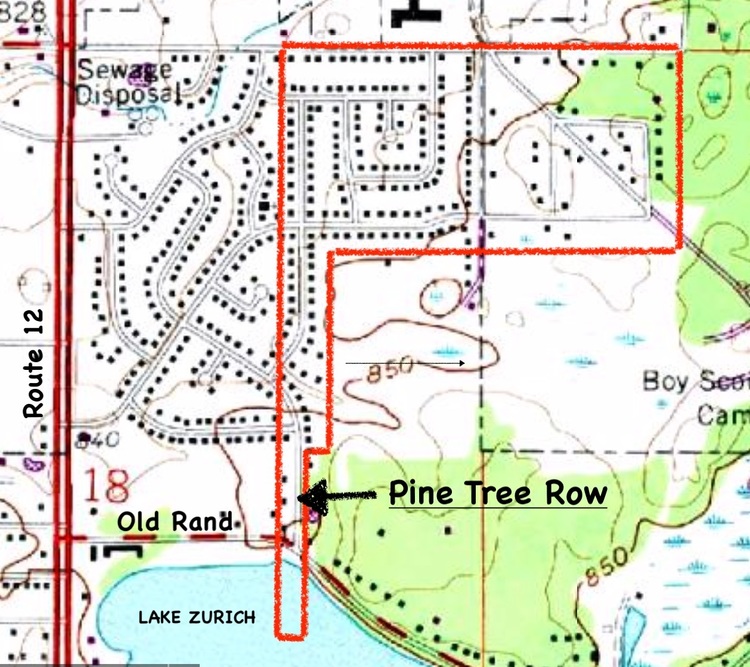 The first semblance of a village of any sort on Lake Zurich was somewhere in this area in the 1840s. There was a general store, Mrs.Gilligan’s grocery and  Crawford’s blacksmith shop. By 1860 these businesses had moved over to the present village area that Seth Paine had started. One winter, Crawford’s blacksmith shop was put on skids and dragged over the frozen lake to its new location in the newly founded village of Lake Zurich.

Continue further to the corner of Pine Tree Row, which is a street with an interesting history.   It was built on a strip of land that originally was part of a larger parcel once slated  to be a utopian community called The League of Universal Brotherhood. This was a planned community that Seth Paine, Lake Zurich’s founder, had tried implementing back in 1849.  Pine Tree Row may have originally been a dirt trail leading back to the main 80 acres of the proposed community. The area outlined in red on this  map shows where Paine was planning to develope his community.

Bobbers on the corner here was originally a snack stand and tavern called the Shady Rest that was started in the 1920s. In the 1970s  it became Eng’s Tea House, a well liked Chinese restuarant. Now it is Bobbers, a great place to stop for a good meal and a view of the lake. There were sections of the original Shady Rest used in the new construction, which can still be seen today.  Walk across Pine Tree Row and continue on. Push NEXT.