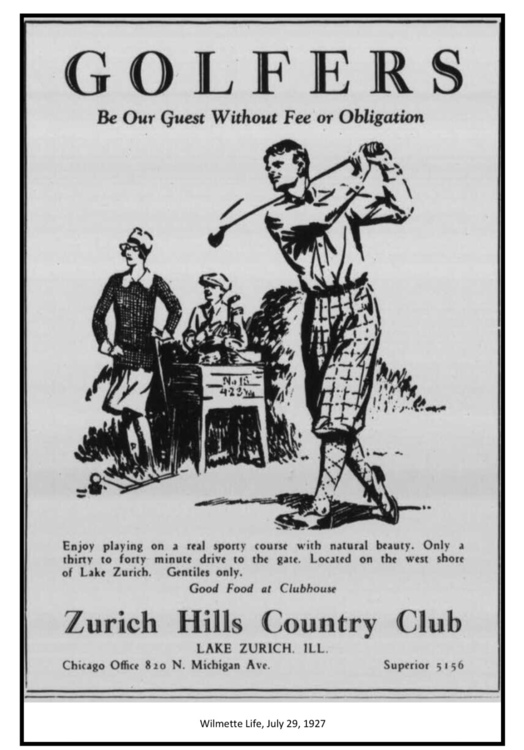 This is the intersection of Honey Lake Road.  At one time, before Route 22 was improved in the 1920s, this was the only decent road heading west from Lake Zurich. It wasn’t  blocked off as it is today, and connected with Signal Hill Road.  Just north of Honey Lake Road in this area, there was once a huge 220 acre golf course called Zurich Hills Country Club. Created in the late 1920s, it stretched north along  the lake all the way to Old Rand Road and westward nearly 3/4 of a mile. A large clubhouse was originally planned to be  right on the lakeshore. Unfortunately, the 1929 stock market crash  spelled doom for the golf course and the clubhouse. Part of the course became a small subdivision named Zurich Heights Golf Club Estates, which today we know as the Heights. Some of the streets such as Golfview, Fairway, and Country Club still serve to remind us of  the old golf course.

One of the more popular places for swimming and  boat rental at Lake Zurich  was Sandy Point Beach, located along this stretch where the townhomes are today at Sandy Point Lane. It first opened after World War II, and was in operation until 1986, when the property was sold.

As you approach the intersection of Rt 12 and Old Rand, you will pass a small brick building on the lake side, built in 1948. This used to be the Lake Shore Picnic Grove and Bait Shop in the 1960s and 70s.  In 1975 it became popular as a small coffee shop called Will’s Bait Shop, where you could get your breakfast, buy bait, and then rent a boat to go fishing. Continue walking to the intersection , and when you are there, push Next.