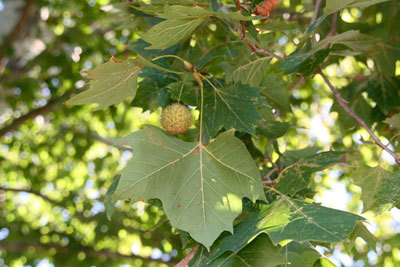 This is the AMERICAN SYCAMORE. The American sycamore symbolizes eternity, strength and divinity. Sycamore trees can reach heights of 90 to 130 feet and approximately 5 to 6 feet in trunk diameter.

The mottled bark characterized by creamy patches of newly formed bark, interspersed between reddish brown pieces of exfoliating old bark, give the tree the appearance of being “sick” … thus giving it the name “sycamore”.

The American sycamore has broad, five-lobed leaves with pointed tips and toothed edges. The dark green leaves change to bright yellow in autumn. The tree blooms in April, and its yellowish-green flowers produce nectar which attracts bees, the main pollinators of this tree species. The American sycamore produces brown, woody fruit balls that are visible starting around October and remain on the tree during the winter. When the seed balls split and release their seed in the spring, the seeds are often called “helicopters” because their wings rotate while falling, similar to a helicopter’s propeller.

The American sycamore has a round shaped crown that is quite dense. It has twisted branches, which provide shelter for squirrels and birds, mainly during nesting season.

Sycamore tree wood is used to make furniture, musical instruments, and butcher’s blocks. Sycamore trees are often planted in urban areas because of their ability to tolerate air pollution.

The sycamore tree has been documented historically on at least two occasions.  In the Bible, the wee little man Zacchaeus climbed up a sycamore tree to get a better glimpse of Jesus who was walking by. You can read about this story in the book of Luke, Chapter 19. Another incident in history where a sycamore tree is documented is during the Revolutionary War Battle of Brandywine in 1777. On the property of Brandywine Battlefield Park in Pennsylvania sits a 400-year-old sycamore tree that witnessed the Revolutionary War battle. Legend has it that Marquis de Lafayette, the famous French Continental Army Major-General, rested against this tree while his wounded leg was being tended to. Since then, the sycamore tree has been a symbol of hope and protection in the United States.