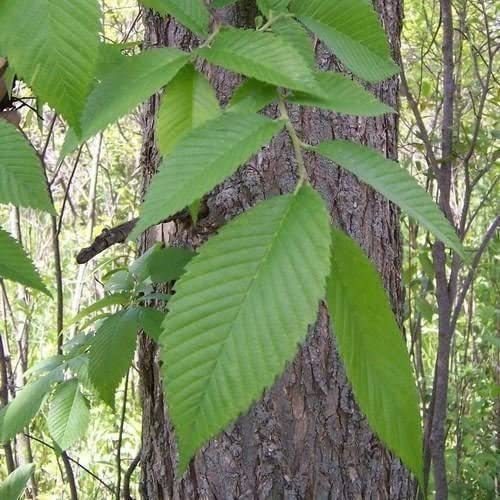 This is the AMERICAN ELM. Native to the eastern United States, the American elm once lined the streets of many cities because of its fast growth and arching cathedral like limbs. Also known as the white elm, the American elm reaches heights ranging from 60 to 150 feet tall and canopy widths of 60 to 120 feet depending on the soil condition.  Most American elms have a divided trunk near the base with vertical branches that sweep upward giving it a vase-like shape.  The bark is dark grayish-brown with broad ridges and diamond-shaped fissures. The oval shaped leaves usually measure 3 to 5 inches long, are toothed along the edges, and present in an alternating pattern on the branch. Each leaf, which has about 15 pairs of veins, has a green smooth upper surface and a pale downy under surface. The leaves of the American elm turn a plain yellow color in the fall. Both the flowers and the fruit of the American elm are small and inconspicuous while on the tree, but the fruits can create a mess on sidewalks and other hard surfaces under the trees where they collect.

The inner bark is tough and can be twisted into fibers and made into a rope. Because the wood is heavy and strong, it has been used in flooring, shipbuilding, and for farm tools.

The range of the American elm extends from Florida to Newfoundland and west to North Dakota and Texas.

The American elm experienced a dramatic decline during the 20th century due to Dutch Elm Disease, which entered the country from Europe on shipments of logs in 1930. Dutch elm disease is caused by an Asian fungus which is spread from tree to tree by North American and European elm bark beetles. The disease continues to be a problem today causing these trees to only survive about 30 years compared to the 200 or more years this tree species used to thrive.

The American elm is the state trees of North Dakota and Massachusetts.