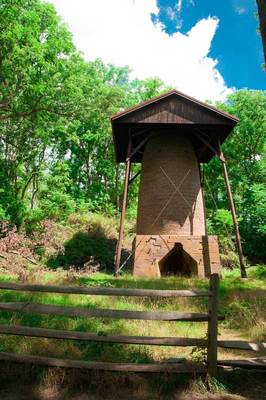 The primary purpose of the Howell Iron Works was to produce iron. Iron is made from a natural renewable resource called bog iron. This is found buried in swampy areas along the Manasquan River.  Bog Iron consists of iron and other natural impurities. In order to access the iron, the rock needs to be melted down at 3,000 degrees to separate the impurities out. Once the liquidated iron is separated it is finally cooled down into rods called pig iron.

At the time, the Blast Furnace used charcoal as a fuel source and limestone as a flux to help separate the iron from the rest of the impurities.

Blast furnaces were typically located near a hill where ingredients to make iron, including charcoal, limestone and bog iron, could be "charged" or loaded from the top of the furnace and received at the bottom.

The complete Blast Furnace at the Howell Works consisted of a Bridge House, Wheel House, and a Casting Shed. The Bridge House was where the ingredients were loaded into the furnace, the Wheel House was where the water wheel was held that helped pump oxygen into the furnace, and the Casting Shed housed the Blast Furnace and smaller cupola furnaces for reheating purposes.  Today, only the furnace itself is still standing.