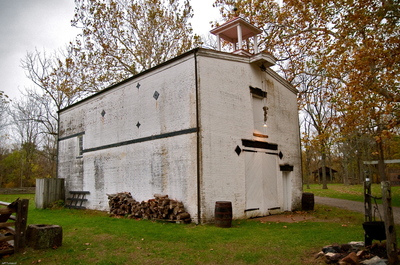 The original Carriage House was a wooden structure constructed in 1825. In 1831, a stage line to Red Bank began where products could be shipped between Mr. Allaire's company in New York and the Howell Iron Works. The following year the Post Office was opened in the village.  With the increase in traffic to and from the village, as well as the ever increasing level of production at the Furnace, a new and enlarged Carriage House was needed. This new Carriage House was constructed of brick in 1833. Shortly afterwards a three story apartment was added to the rear to provide accommodations for a full-time gardener.

The Carriage House was used to store the various carriages, carts, wagons, sledges, and sleighs used by the Howell Iron Works and the residents for transportation to and from the village and for hauling materials and finished products.  An enclosed loft occupies the second floor. Draft animals, including oxen, mules, and draft horses were stabled in a series of barns near the Carriage House.  The barn standing next to the Carriage House today is a recreation of a smaller barn from the period, built on the original foundation.