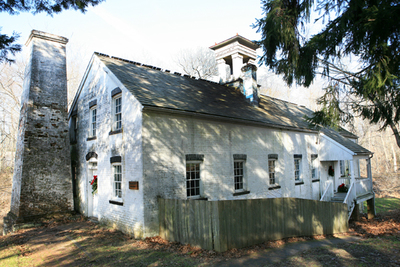 Unfortunately, the early history of the Enameling Building is somewhat vague.  The northern section of the building is thought to date from 1828, while the southern section with the enameling furnace dates from 1834.  For a time the building was named The Fort although there is no record as to how it got that name. Inside the building is an enameling furnace, which was used to coat cast iron with clay high in silica (glass) to make it food safe. The enamelware process was an experiment of sorts and was only in operation for one year during the time of the Howell Iron Works. It seemed that there were issues with perfecting the process and that the time and energy was better used at the iron furnace.

After the enameling process ceased it is unclear whether or not the building was being used and for what purpose.  By 1850 the building had been converted into a residence for the file cutter, Samuel Stokes and his family.

Today the building serves as an education center for Arthur Brisbane, a wealther newspaper editor from New York who bought the Allaire property at the turn of the century. He built a mansion on the other side of Atlantic Avenue and spent time here with his family. He loaned the property to the Boy Scouts of America in the 1920s and upon his death in 1936, he donated the land to the state of New Jersey in his will.