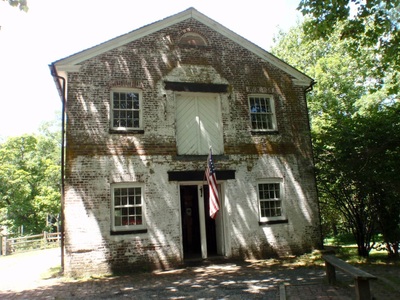 The Carpentry Shop you see today was constructed to replace a smaller wooden structure in 1835.  The Carpentry Shop was one of the most important structures in the village because it made the patterns used in the casting house to make iron products such as steam engine parts and hollowware, which is cast iron cookware.

The Carpenter was among the most skilled of Mr. Allaire’s employees and they were almost certainly among the highest paid.  Records indicate that the prevailing wage for skilled workers was about $2 a day. To put that into perspective, a common denomination of currency at the time was 6 ½ cents. The Wheelwright Shop, which is now housed in the last room of the Carpentry Shop, was responsible for making new wheels and repairing old ones. The railroad did not yet run through this part of New Jersey, so everything had to be shipped to and from the Howell Iron Works by wagon.

Fun Fact! During the late 1890s and into the 1900s, the Carpentry Shop was a French restaurant. Rumor has it during the Prohibition Era a speakeasy was located in the basement!