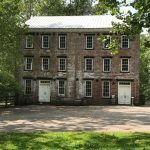 The General Store was built in 1835 at the substantial cost of $7,000.  The store was designed to attract patrons not only from the town but from the surrounding community.  Shipments returning from New York brought back all sorts of goods and commodities not readily accessible in the local community.  The store also included a drug store, an elevator, and a Post Office.  The elevator was used to carry goods to the upper floors and worked on a series of pulleys. The Post Office sent out and received mail once a week.  The cellar was where meat, fish, molasses, and coarse groceries were sold. The first floor was the location for the drug store, Post Office, and sales of dry goods, hardware, light groceries, ironware, wines, flour and meal.  The second floor was crowded with furniture and unpacked merchandise. The top floor was used for storage of grain and other goods. Garden produce and milk from the farms were also sold at the store.

The Howell Iron Works had it's own form of currency at the time called the Howell Works Scrip.  There was no national form of currency until after the Civil War so it was not uncommon for states and towns to have their own form of money. Paying employees in currency that is only accepted in the village made it better for the company economically since the money was continuously circulating throughout the village. The Howell Works Scrip had a picture of the furnace on the back and a picture of Benjamin Franklin on the front.