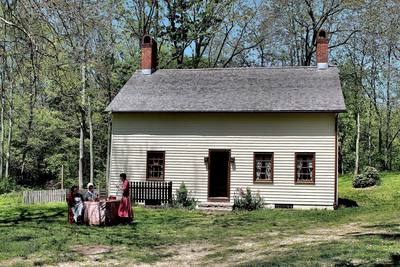 The Manager’s House is the oldest building in the village dating between 1750 and 1760.  It was constructed by Isaac Palmer, who operated a lumber mill site during the mid 1700s.

In 1836 the home was occupied by the Smith family.  James Partial Smith served as the manager of the Howell Iron Works and oversaw the day-to-day operations of the factory.  Mr. Allaire primarily lived in New York and would visit when possible.  The Manager was paid $2,500 a year.  The Smith family was considered upper middle class and lived in a very large house for the time period.  The family consisted of six people: James, his wife Elizabeth and their six children. Given their economic status, the Smith family may have also employed a servant to help with the cooking and cleaning, but we do not know for sure.

The house itself is rather impressive and serves as a good example to compare the living arrangements between the workers in the row houses and the wealthier Smith family.  On the first floor is the main kitchen with a hearth and a bake oven which is the only one in a private home in the village.  They also have a summer hearth which is located in the basement, so that cooking in the summer would not heat up the entire house during the warm months.

Also on the first floor there is a front parlor and the back parlor.  The front parlor is a formal sitting room that was used primarily for entertaining adults and guests.  Children had to be specifically invited into this room. The back parlor is where the children would be able to do their homework, play games and where the family could gather.  The second floor is occupied by four nice sized bedrooms.