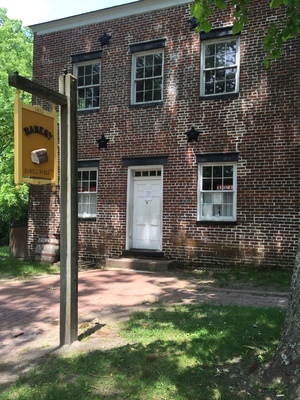 This building was built in 1835 to supply bread for the village since most homes did not have bake ovens. It takes several hours to get the bake oven to heat. A fire is started in the oven and the heat is absorbed into the brick.  When the oven reaches about 500 degrees fahrenheit the coals are raked out through a metal door near the front of the oven. The bread is then added to the oven and bakes with the radiant heat.  As the temperature falls, cakes and pies could also have been baked. At the coolest temperature fruit could have been dried. It is unknown whether there was a full time baker or if the bakery was communally run.

It also served as a residence for the various Boy Scout troops during the Camp Burton era of the 1920s.  They carved their initials on the third floor door.

Today all of the retail items sold in the Bakery are made off site by local bakers.  During some special events hearth cooking demonstrations may be done.