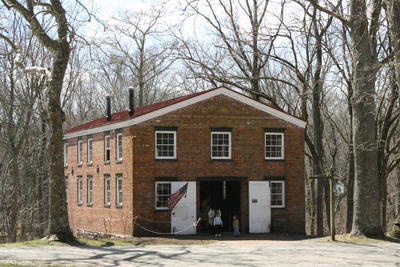 The Blacksmith Shop was built in 1836.  It replaced an earlier structure that once stood between the General Store and the Blast Furnace.  It contained only one forge and was not able to keep up with the production demands of the village. The new shop had four forges making it one of the largest in New Jersey for its time.

Blacksmithing is the working of iron to produce tools and equipment.  In order to bend and shape iron, the blacksmiths had to heat the iron in a forge reaching temperatures of 2,000 degrees. Historically, blacksmiths often called themselves mechanics. The blacksmiths were responsible for repairing wagon tires, producing tools, repairing carriages, maintaining machinery, and shoeing draft animals. The average blacksmith of the time could make a nail a minute! Today the blacksmiths of The Historic Village at Allaire produce numerous items for use around the village and for sale in the General Store.

There was at least one, but perhaps two, female smiths who worked for the shop sometime between 1822 and 1825.  We believe their names were Paty and Mary Fowler.