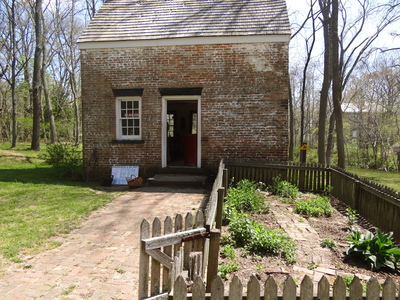 The Foreman’s Cottage is the first brick structure built on site under the ownership of James P Allaire.  It was built in 1827.

In 1836 the Johnson family lived in this building.  Mr. Jacob Johnson was the Foreman at the Howell Iron Works.  The Foreman was an important position and was probably considered middle class.  His job was to oversee the operation of the Blast Furnace, which is where the iron was produced.

The Johnson family consisted of five people: Mr. and Mrs. Johnson, their two daughters and Mr. Johnson’s sister Emeline, until she married and moved away with her husband.  Mr. and Mrs. Johnson slept downstairs in a slaw bed, which resembles today’s Murphy bed.  The bed frame consists of ropes that supports the mattress. This is where the expression sleep tight came from since villagers needed to tighten the ropes of their beds so they wouldn't sag. The children and Emeline slept upstairs in a loft that was also used for storage.  This home was considered spacious by the standards of the time period.   From the path, visitors are seeing the back entrance of the home along with an herb garden full of plants used for home maintenence and medicinal purposes.