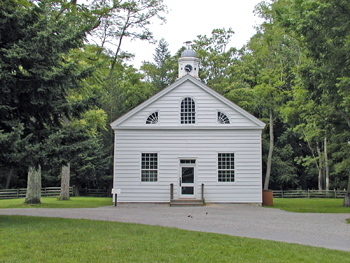 The Chapel served the village in several ways. Primarily it was a place of worship, but it was also used as a meeting place and a school.  The building was constructed in two sections.  The first section, where the entrance of the building is, was constructed of old recycled wood in 1832 in order to be constructed quickly.  The second section of the church was completed in 1836 and was made out of new wood so it was able to support the weight of a belfry.  Most churches have the belfry at the front of the building, so it is unusual that our chapel has it on the back.

The chapel at the Howell Works was of Episcopal denomination, but it was not mandatory for the villagers to attend this particular church.

The Chapel also served as a school for a time.  All the children of the village were encouraged to attend school free of charge up until the age of twelve. It was unusual for school to be free and to admit girls during the 1830s.

The students were educated using the Lancasterian System that was developed in England by Joseph Lancaster.  This system worked by the instructor teaching the older students and they, in turn, teaching the younger ones.  It’s kind of like peer tutoring today.  Children attended school three days a week from sun-up to sun-down.

Today the Chapel is used for historic reenactments and weddings!