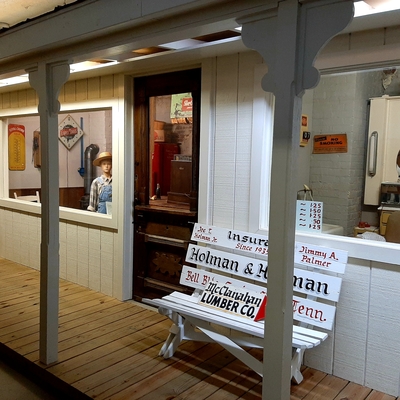 This is an example of an early Main Street.  The first stop is a funeral parlor.  Bodies of the deceased were kept at home before funeral parlors.  Next you see a barber shop.  The barber shop was often the local gathering spot for the men.  Of primary importance in the community was the general store which was  the social gathering spot for the whole community except for churches.  You can see a telephone on the wall.  At one time only grocery stores had phones.   If a call came for you, someone would have to go to your home and tell you.   Everyone would gather at the store to hear the call.   Here people would catch up with their neighbors and buy any supplies they did not produce themselves.  The next window shows the dental practice of Dr. Swann.  He was one of the longest practicing dentists in Tennessee.   You can see his dental instruments and the chairs he used.   In the corner window is the printing presses used by the Robertson County Times and  Eckles Printing Company.  Around the walls are several maps for you to view showing Robertson County of the past.  The maps include the 1868 Wessyngton Plantation, the 1912 Robertson County Soils Map, Robertson County Civil Districts, and the 1930s Postal Route map.  The next stop the Courthouse is back in the main room.