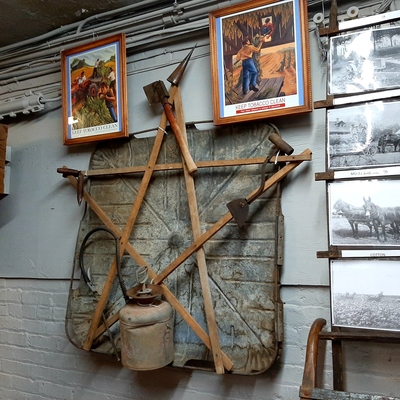 Farmers would have up to 300 hours of labor to produce one acre of tobacco.  After harvested, cured, and graded their crop would be packed for market.  Each basket of farm graded tobacco would hold up to 700 pounds.  On the wall you will see hanging a metal basket which was used prior to World War II.  These baskets were discontinued and the metal used in the war effort.  The farmers then began using wooden baskets.   The wooden basket is sitting on top of a duck bill.  The duck bill was used to move the packed baskets in the tobacco warehouse. The tools you see on the metal basket include a peg for hand transplanting of the tobacco plant.  The tobacco sticks, split knife, hatchet and spike used for harvest.  The oil can was used to control suckers on the tobacco plant.