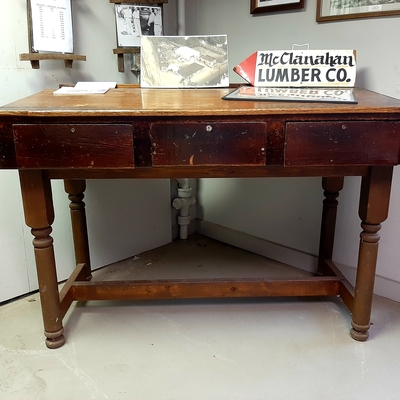 You will notice the desk which was once used in the Springfield City Hall which was once located next door to the Post Office which now houses the museum where you are today.  It was later used at McClanahan Lumber Company located  at Cheatham Street and the railroad.  There are examples of water pipes which were used in the City of Springfield.  The wooden water pipe trunk line was used to pump water from Black Branch to the 10th Avenue water station. There is a portable voting booth which was used in the county. In 1919 the 19th Amendment was passed giving women the right to vote.  Inside the voting booth you can see the record of the first election on Tuesday,  November 2, 1920 where women voted for the first time.  This election return is from the first district which was in Handleyton in Robertson County.  The first woman was Minnie Ellison who was the eighth voter that day. You would enter and mark your paper ballot and place it in a locked metal box to be tallied by County Election Officials.  Please go through open doorway for next exhibit on the left of Century Farms of Robertson County.