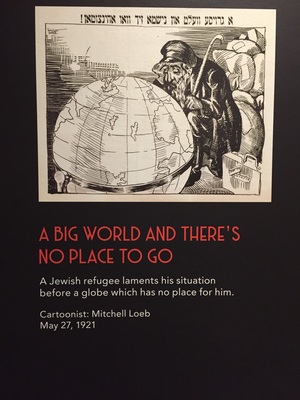 The Door Slams Shut: Jews and Immigration in the Face of American Reaction

Go through the double doors and move to the right of the stairwell.  You have arrived at the Joan Constantiner Gallery, which is number 18 on your map.

"The Door Slams Shut: Jews and Immigration in the Face of American Reaction," is presented by YIVO Institute for Jewish Research.

Think about the current uproar over today's immigration policy.  Does history repeat itself?

While natavist animosity today falls upon Mexican, Central American, and Muslim migrants, about 100 years ago, this same hatred was aimed at the Jews.

Der groyser kundes, the Lower East Side’s premier Yiddish satire weekly, attacked the Immigration Quota Acts of 1921 and 1924, which were enacted to severely stifle Jewish immigration to the United States.

Using political, cultural, and traditional Jewish imagery, the artists of Der groyser kundes crafted numerous cartoons to show how dire the situation was from the perspective of the Jewish immigrant community.

100 years later, the players have changed. But the issues have remained remarkably similar.

Now, walk across the hallway to number 20 on your map.