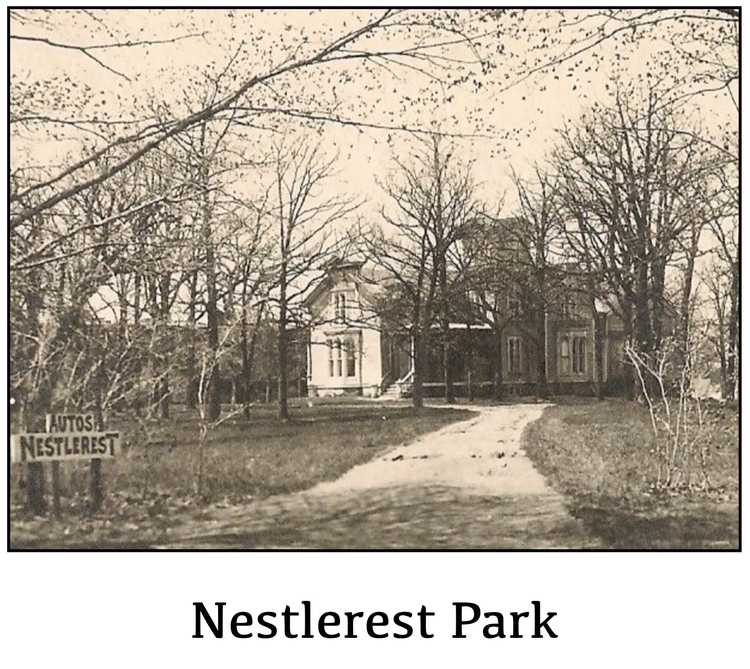 Now you are starting the last leg of your walk, around the south side of the lake.   Along this section of Robertson Road there were two picnic groves along the right side that ran to the lake, called Renard Park and Nestlerest Park.  This photo shows the old and rather foreboding house at Nestlerest Park, originally built by Isaac Fox in the late 1850s. Back in the 1940s, it was Lake Zurich’s “haunted mansion”, the one place in town that kids were afraid to visit. It is still there today, but has been remodeled.   During the 60s and 70s Nestlerest was a very popular picnic grove, and opperated amusement rides like bumper cars, a small train, and a  Ferris wheel. They even had a paddle boat called the Lake Zurich Queen, providing rides on the lake.  The house built by Isaac Fox is on your right as you near the end of Robertson Road.

When you reach the end, you will see South Shore Lane on the right heading down to the lake. Before it was a street, it was part of a railroad spur line heading down to the old Knickerbocker Ice house. Since it is a dead end, our tour does not go down there, but continues straight ahead. Take the sidewalk towards the main intersection and keep to the right. You want to start heading up Whitney Road. At the very beginning of Whitney Road, pause and give a silent prayer for the old Whitneys who were once buried just to your right in the old Whitney family cemetery. They were all moved to a cemetery in Barrington back in the 1870s.   You may push NEXT