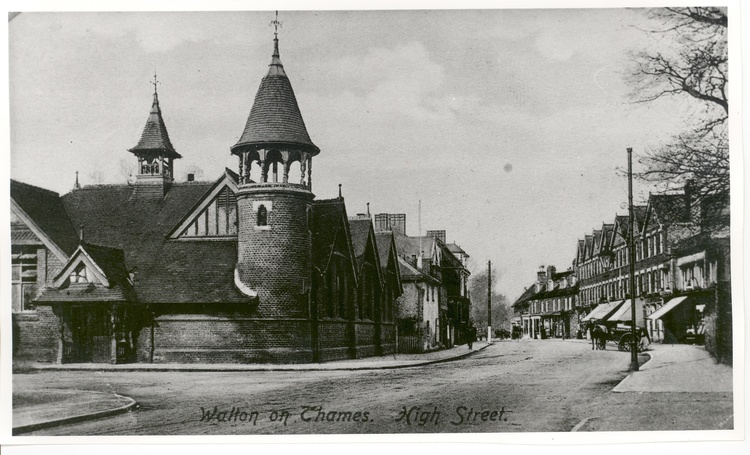 In 1884, this late-Victorian building was an infant school. Its large classrooms looked out onto the High Street, and had rows of benches and desks which seated reasonably small classes of around 20 to 30 girls and boys. The children were taught some lessons mixed, and some lessons segregated by gender.

The school continued to thrive from the turn of the 20th Century, with additions to the building even being made in 1909. Elmbridge Museum holds many pictures of the students here being taught by schoolmistress Miss E Peet throughout the 1920s. However, by the end of the decade the building was no longer fit for purpose as a school, and it moved to a larger building in Walton’s Ambleside Avenue in 1931.

The building subsequently became Walton Library. This was a very popular community venue in the mid-1900s, with many public events and history lectures held here in collaboration with Elmbridge Museum and other organisations. Librarians were involved in loaning and exchanging subject books to local colleges and universities, as at this time the library had some highly specialist collections about all manner of topics, from geology and law, to foreign literature and music. The library remained here until 2008, when it moved from its old school building to the new Heart shopping centre.

The Old Library is now home to the Elmbridge Community Hub. Visit the building to see the heritage trail panel.