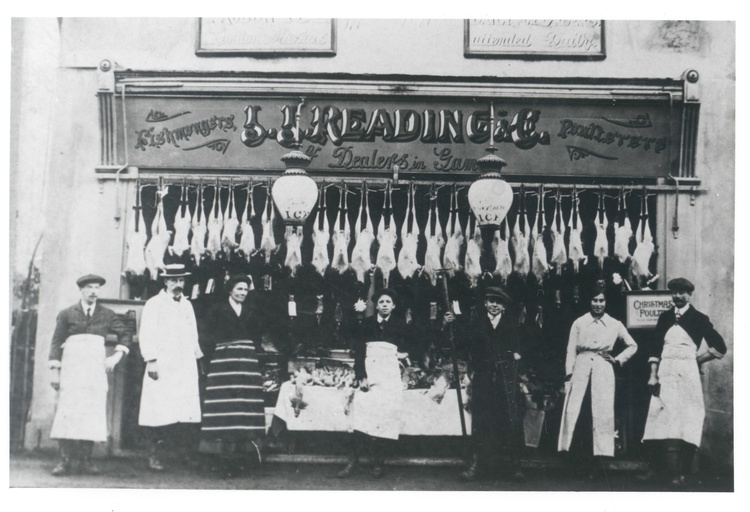 This building is one of the oldest in the whole High Street. It has traditionally been known as "Ireton's House", thanks to a history which dates back to the mid-1600s.

General Henry Ireton was a Parliamentarian Military commander in the English Civil War. He married Oliver Cromwell's daughter, and was supposedly given the house as a gift. However, there is no evidence that the family lived here. During the Civil War, most of Elmbridge was occupied by Parliamentarian forces, who opposed Charles I. This house was within a short walking distance of the grand Tudor Oatlands Palace, inhabited throughout the years by royalty, and now the site of the Oatlands Park Hotel.

Over 200 years later, this building’s life as a shop had begun. In the 1910s it was owned by J.J. Reading and Co., and served as a fishmonger’s and poulterer’s shop. Thomas Purdue managed the shop with his wife Annie, and they lived close by, at 48 Annett Road. Thomas’s brother Henry and the couple’s two children, Thomas and Winnie, later also worked with them in the store and on Purdue’s delivery tricycle. After leaving school at the age of 14 in 1916, local boy Bernard Deakin also worked at the shop for many years, starting out as the delivery boy and then becoming a shopman. Bernard’s father, Digger Deakin, was a well-known local man, and worked at Walton and Weybridge Council for over 20 years. Bernard’s son donated all of the historic photographs of the former shop to Elmbridge Museum.

Ireton's House is now home to Click Save and Print. Visit the store to see the heritage trail panel.