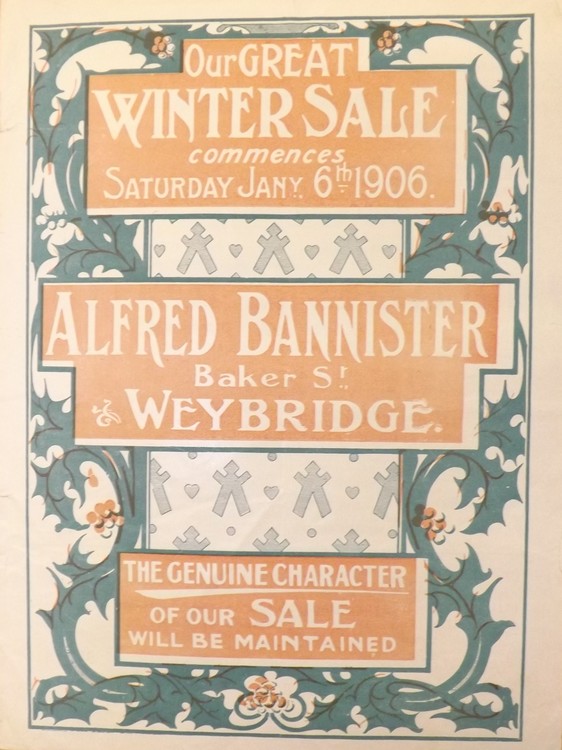 RW Charles had a draper’s shop in this building in Baker Street, from 1888 to 1902. He was succeeded here by Alfred Bannister, who later opened a second branch in Queens Road, in February 1912.

In contemporary advertisements for the store, it is described as a ‘high class ladies and children’s outfitters’, supplying dresses, blouses, household linen and knitwear. Many items from the Baker Street branch are preserved in Elmbridge Museum’s collection, including swatches of dress material which would have been perused by customers of the day, and brightly illustrated adverts for seasonal sales at the store throughout the 1920s and 30s – one of which is annotated with shoppers notes and price calculations on the back. Some of the clothing sold at Bannisters also still survives, with yellow printed ‘Bannisters’ labels in each garment.

In the 1950's, Alfred Bannister retired. The shop premises was bought from Bannister in 1959 – the year that he died  - by Miss Dunn. She was first employed at this Bannister's shop in Baker Street in the 1920's, and rose to become manageress of the Queens Road branch, while also acting as housekeeper to Mr. Bannister from about 1950. She kept the business until her retirement in 1964.

Bannister's is now home to Weybridge Audio. Visit the store to see the heritage trail panel.